As FEBC builds a new FM station in the conflicted nation of Ukraine, Dr Victor Akhterov has sent a special Thank You message to FEBC New Zealand supporters.

Located on the Black Sea, the million-strong port city of Odessa reflects the duel nature of Ukraine’s current reality. It flourishes with art and passion rooted in Jewish charm and is home to many Russian and Ukrainian comedians. This cultural hub and third largest city in Ukraine has been called “A smile of God.”

However, it is also notoriously known as “Mother Odessa,” referring to its role as a long-standing capital of crime.

“As our country is going through the biggest challenge of our generation, we need the voice of reason, morality, and love in our city. FEBC is that voice. We need you here, friends.” – Tatyana, a young Christian in Odessa

Despite efforts by the Ukrainian president to combat a shocking amount of corruption and criminal activity, crime increased 30% last year and conflict grows daily, threatening the stability and progress of this beloved city.

Today, Odessa is wounded and terrified. 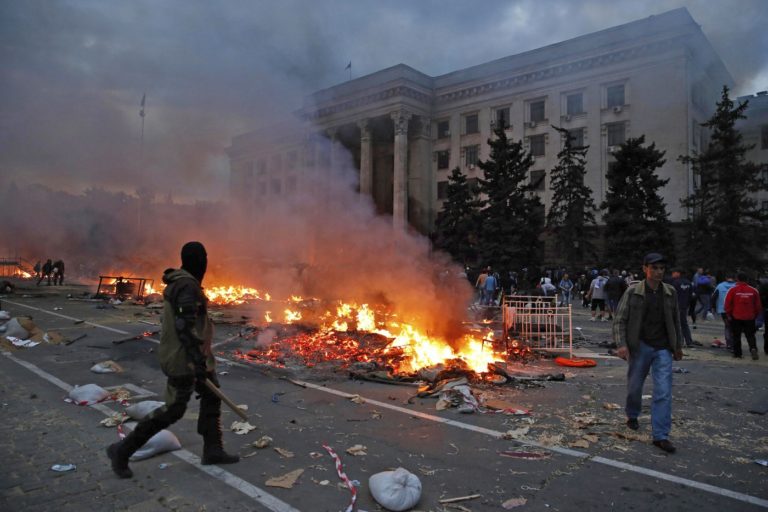 A protester walks past a burning pro-Russian tent camp near the trade union building in Odessa May 2, 2014. REUTERS/Yevgeny Volokin.

That’s why, when the Ukrainian National Media Licensing Commission was deciding to whom they should give an FM frequency in Odessa, they agreed a Christian voice was desperately needed there. FEBC was granted a permission to build a station in that city.

The new transmitter has recently arrived in Odessa, Ukraine, and Dr Victor Akhterov described the next steps to changing lives in Ukraine:

Please prayer for: the installation process to be smooth, and the test broadcasts to be totally successful. May the technology serve the LORD and the people well.

This is what the donations and prayers from New Zealand, Australia, USA, and Canada are building – facilities and programmes that broadcast the love of God to wounded and lost people. To make a special donation to Ukraine please click on the Donate button below, choose Special Appeal, and type “Ukraine” in the comments box down the page.